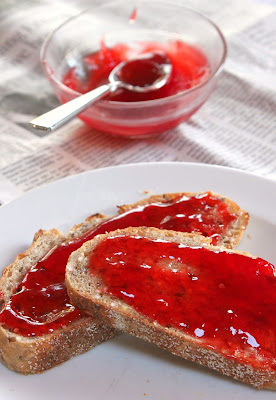 The first thing I did when my husband and I bought our house in Santa Monica 17 years ago was to plant fruit trees in the backyard.

The house came with an old avocado tree, a scraggly lemon tree, and a dwarf fig tree. I put in lime, tangerine, Meyer lemon, kumquat.

Most of which died. Turns out the huge eucalyptus tree we removed when we moved in did something nasty to the soil, and baby trees don't like eucalyptus oil.

But the Santa Rosa plum tree I put in about five years ago has held its own. Last year it gave us three plums. I was encouraged.

This year we got a cool dozen and a half plums. All of which ripened at once. So I cut them up, added some sugar and boiled them down into a gem-colored jam that looks and tastes like a southern California sunset during fire season, all flame-red and intense.

Santa Rosa plums are hard to find outside California. They're thin-skinned and turn soft as soon as they ripen, so shipping them is nearly impossible. But you'll never find a plum that tastes more like a plum than a Santa Rosa. If you see them, grab them. 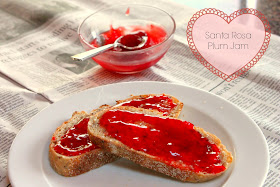 Santa Rosa plum jam
by Erika Kerekes July-17-2013
Fruit, sugar and heat: That's all you need to make this Santa Rosa plum jam. If you can't find Santa Rosas, substitute another tart, purple-skinned plum.
Ingredients
Instructions
In a medium-sized pot, combine the chopped plums with the sugar. Let sit 5 minutes. Bring the plum mixture to a boil, then quickly turn down the heat to medium (not low) and cook the jam about 20 minutes, until the syrup has thickened and the bubbles coming to the top are big and viscous. Turn off the heat and puree the jam with a hand-held immersion blender, or pour the mixture into a countertop blender or food processor and blend until smooth.Immediately pour the jam into a clean jar or other glass container. Cover, let cool on the counter, then refrigerate until chilled. Use within 4 weeks. (Alternatively, you can process the jam in a water bath according to standard canning methods - I'm just way too lazy.)
Details
Prep time: 10 mins Cook time: 20 mins Total time: 30 mins Yield: about 2 1/2 cups
at 5:07 PM
Share